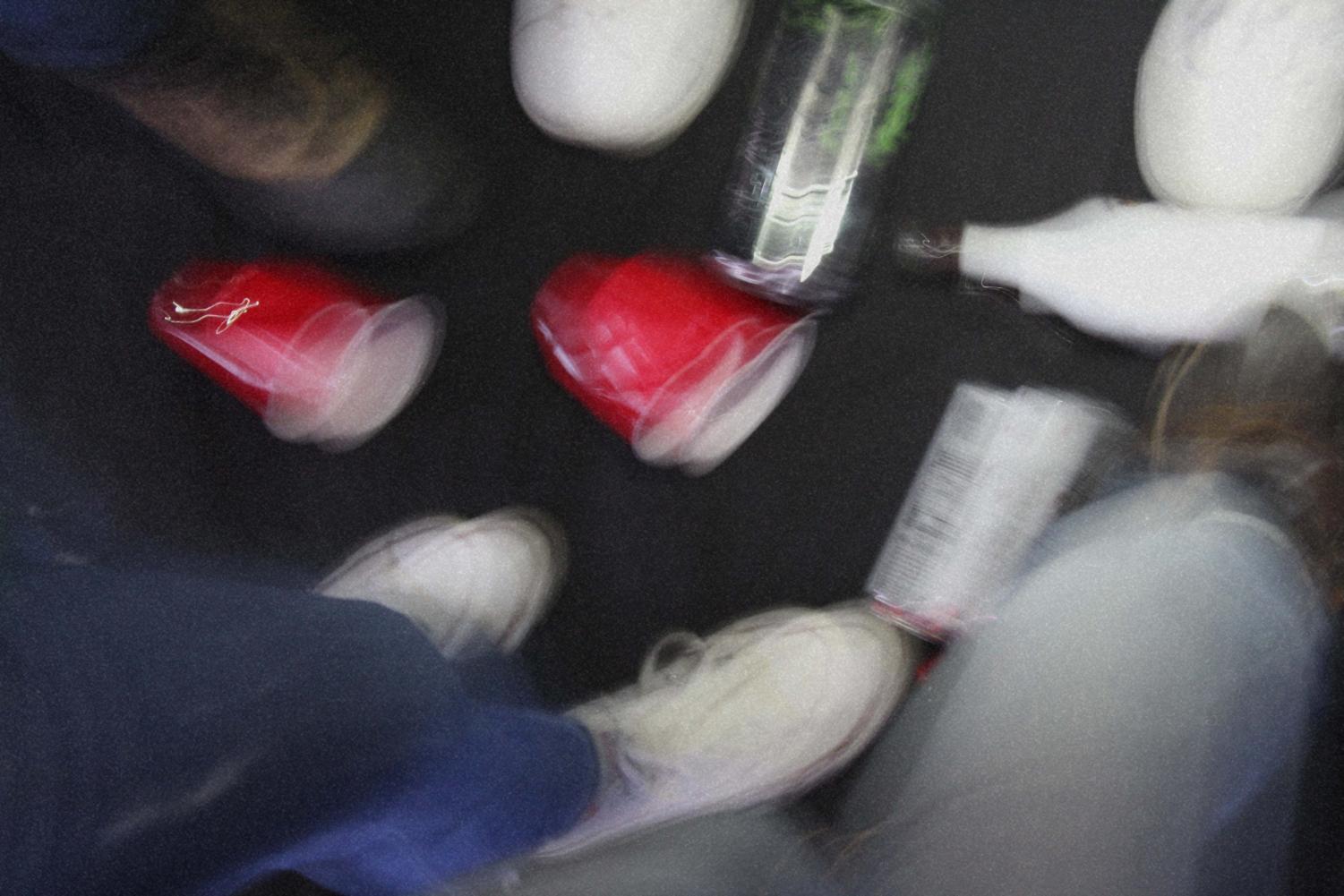 When surveyed in 2015, 7.7 million young people between the ages of 12-20 said they had consumed alcohol in the last month. (Annie Smuts)

When surveyed in 2015, 7.7 million young people between the ages of 12-20 said they had consumed alcohol in the last month.

As many students get older, they are coming face-to-face with alcohol, either through peer pressure or pure curiosity, but many downplay the harmful effects consumption can have on the rest of their lives

The first time senior Amelia Stewart, whose name has been changed, drank alcohol, she was in her friend’s basement.

“One of the girls [I was with] knew someone from another school [and they gave us the alcohol],” she recalls.

Stewart says she enjoyed the experience and now drinks about once a month with her friends.

“[It creates] a fun atmosphere,” Stewart said. “It’s something to do on a Friday or Saturday night. It’s sad to say, but it brings kids together.”

Stewart is far from the only one who drinks underage. According to the National Institute on Alcohol Abuse and Alcoholism (NIAAA), by the age of eighteen, about 60 percent of teenagers have had at least one drink, and when surveyed in 2015, 7.7 million young people between the ages of 12-20 said they had consumed alcohol in the last month. Many think that underage drinking happens primarily in college, but that isn’t the case. Officer John Julian of the Troy Police Department says underage drinking is incredibly common among young people.

“It’s unfortunate but anytime, it’s very common when you get a group of teens at a party, per se, that they do unfortunately drink underage,” he said. “We have all seen it here and some tragic things have happened.”

On Feb. 9, 23 teens in Troy were cited for underage drinking when police broke up a party on Beach Road. One sixteen-year-old was hospitalized because of her high blood alcohol content. Julian reiterated the dangers of drinking underage because of young people’s inexperience with the substance.

“Physically, obviously, [you don’t know] your limits, [which can lead to] drinking too much and going to the hospital and getting alcohol poisoning or drinking and driving, which one, is against the law whether you are an adult or not, but also is very dangerous and people have been seriously injured or killed for this,” he said.

Physically, obviously, [you don’t know] your limits, [which can lead to] drinking too much and going to the hospital and getting alcohol poisoning or drinking and driving, which one, is against the law whether you are an adult or not, but also is very dangerous and people have been seriously injured or killed for this.”

Though this incident happened close to home, many students, including Stewart, don’t think students here drink as much as those at surrounding schools.

“Compared to other schools, as I do have some other friends from [other schools because of sports], I feel like the drinking culture is not too big [here],” she said. “Many people are very focused on academics and prioritize that, but it definitely still does exist because everyone wants to have fun.”

Drinking, especially binge drinking, impairs people’s judgment and leads many to make decisions they wouldn’t when sober. Half of all assaults committed are by men that have consumed alcohol. Senior Sara Butler, whose name has been changed for privacy, was sexually assaulted at a party while intoxicated.

“I was at a big party and I had too much and [this guy] could tell so he took me upstairs,” Butler said. “I don’t remember much but he was definitely extremely forceful when it came to his intentions.”

Butler remembers only bits of what happened.

“I remember the door closing and some other stuff,” she said. “[I] was taken advantage of.”

Many students know the dangers of drinking and what other events can go along with intoxication, but the harmful effects of drinking can be downplayed because it seems like everyone else is doing it. Sophomore Megan Davidson, whose name has been changed for privacy, doesn’t see a problem with drinking underage if one’s careful about it.

“As long as you’re safe and not totally blacking out constantly, it’s no big deal,” she said.

Davidson said she likes to get drunk with her friends, which sometimes includes binge drinking. She doesn’t like the taste of alcohol, but she started drinking because she saw that everyone else was doing it.

“As I get older and meet new people in different grades, I really realize how many people drink, even students I never expected it from get drunk,” Davidson said. “I think we all thought as little kids we’d never drink underage, and that mindset changes so quickly; it’s inevitable that people will drink before the age of 21.”

According to a study published by CBS News, three-quarters of teens who saw their friends partying on social media were more likely to do the same. Furthermore, when teens were surveyed after seeing these images, they were three-times more likely to drink. Stewart acknowledges there is pressure to take part in drinking and using other substances in some friend groups, and though she first tried alcohol during her junior year, she felt like she was late.

Stewart has not been caught drinking by her parents, but that isn’t the case for Davidson and junior Danielle Adams, whose name has been changed.

“I was at my house and we were really drunk and my friend’s mom came to pick her up [out of the blue],” Adams said. “When her mom picked her up, it was obviously noticeable something was up, and she called my parents and we both got in a lot of trouble. I [now] cannot have sleepovers due to the fact my parents were home while we were drinking. I’m also not allowed to hang out with that person anymore.”

Though Davidson didn’t face the same type of repercussions when she was caught by her parents, she was nervous about what they’d think about her.

“It was so humiliating,” she said. “It was also frustrating because I didn’t want to lose their trust. I wish they knew that practically everyone drinks and I’m not a bad kid compared to other people I hear stories about.”

Julian has had to break up multiple parties, but he remembers one in particular.

“We got a call for a noise complaint and upon just observing in the house, we could clearly see there [were] underage people inside and that there was evidence of alcohol consumption—you know, cans and bottles and all that,” he said. “When we knocked on the door, all you can hear was, ‘it’s the police,’ and they all immediately scattered throughout the house and hid. We waited outside, luckily it was summer time, for about 45 minutes until we could get a search warrant and then we literally kicked in the door and we found all the kids.”

A Minor in Possession—commonly known as an MIP—is issued to any person under the age of 21 with a blood alcohol content above 0.02. This is considered a civil infraction for first time offenders under new laws instituted in 2018. Offenders have to pay a fine, and may have to perform community service or attend a substance abuse class. This offense also appears on one’s driving record and is considered public record. A second time offense is considered a misdemeanor and can lead to up to 30 days in jail. Julian emphasized that getting an MIP can lead to bigger consequences later on.

“[It] could affect getting a job, going to college,” he said. “On a background check, if they ask if you have ever been arrested, then yeah, you have to tell them you have [if you have gotten more than one MIP].”

However, not everyone is convinced of the severity of a MIP. Senior Nate Smith, whose name has been changed says he drinks “regularly” with his friends. He has been caught drinking a few times by his parents and has even had a party broken up by the police.

“There was a lot of people there so it was pretty loud so they just came for a noise complaint,” he said. “The front door was open and they walked in. [They] gave eight kids MIPs and another 60 of them ran down to the basement and got away.”

Smith said that the experience of getting an MIP didn’t affect his friends’ drinking habits, though.

“Every single one of the kids I know that have gotten MIPs are in college right now and are still [drinking a lot],” he said. “It was kind of pointless, you’re honestly just a little more [careful] about the cops but it doesn’t really change the fact that you like to drink.”

Another big concern with alcohol consumption is drinking and driving. According to the Center for Disease Control, there were 2,912 deaths resulting from drunk drivers between 2003 and 2012. However, in recent years, fatal drunk driving accidents have fallen by 20.8 percent, according to Choices Recovery, a substance rehabilitation center. Many attribute this to the introduction of ride-hailing services like Uber and Lyft. An independent study found that there was a 25 percent reduction in alcohol-related accidents in New York City’s four boroughs since the introduction of Uber in 2011.
Stewart is aware of how drunk driving can affect one’s life—as she knows someone whose family member died at the hands of a drunk driver—and she encourages people to be safe when they’re drinking.

Some families’ solution to making sure adolescents don’t drive while intoxicated is letting them drink with friends at home, but Julian says this is still extremely problematic.

“It’s called contributing to the delinquency of a minor where parents are like, ‘Oh, I’m gonna be the cool parents, here kids, just drink at my house, leave all your car keys with me that way you’re being safe,’” he said. “Well now they’re providing a location for illegal purpose, so they’re providing the home and hosting and also allowing it so their contributing to the delinquency of a minor as well as encouraging it.”

According to the Partnership for Drug-Free Kids, if a parent provides their children with alcohol at home, the risk of continued drinking into adolescence increases, though many believe the opposite to be true. Julian reiterated the fact that many are trying to change the narrative around providing alcohol in the household, including some local groups.

Every single one of the kids I know that have gotten MIPs are in college right now and are still [drinking a lot]. It was kind of pointless, you’re honestly just a little more [careful] about the cops but it doesn’t really change the fact that you like to drink.”

“Every year we host a campaign in conjunction with the Troy Community Coalition called ‘Parents who Host Lose the Most,’” he said. “[The program] teaches parents [that they’re] really just providing an avenue for them to pursue unsafe acts.”

The program was set up by the Prevention Action Alliance with the goal of “educat[ing] parents about the health and safety risk of providing alcohol to teenagers and increases awareness of and compliance with underage drinking laws.” The organization sends out a PWH Monthly Email Newsletter updating parents on how to best prevent underage drinking in their house. However, Julian has one simple message for teens considering drinking.

“Teens and alcohol don’t mix,” he said. “There’s a reason there is an age limit and a reason why it’s 21, so please wait until then,” he said. “Enjoy being in high school. Enjoy being at this stage in life when you can enjoy so many things other than drinking to have a good time.”