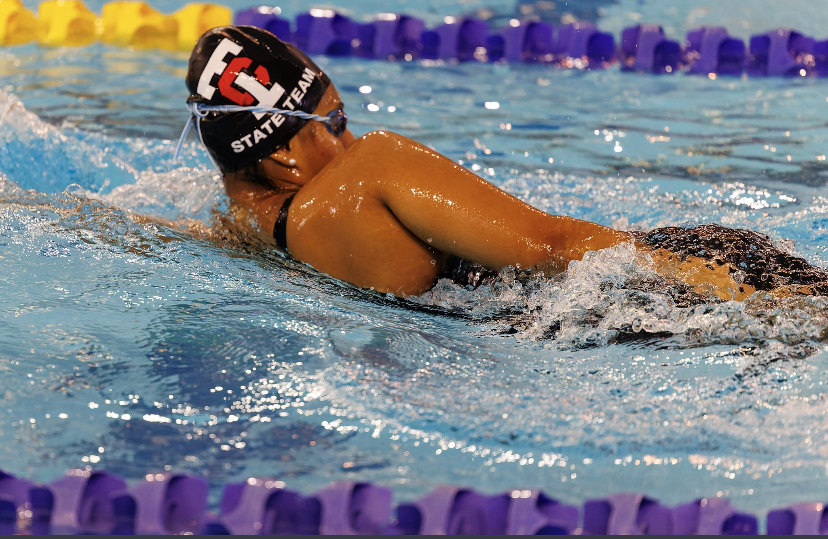 Troy High’s swim team captain, senior Rucha Deshpande, has left her mark on Troy High School. Deshpande, who has been swimming since she was only 5 years old, joined the Troy swim team in her freshman year.

“I joined because swimming has always been something I loved to do,” Deshpande said. “I knew it would be a ton of fun.”

For Deshpande, the best part of the swim team is the team itself.

“Swim has always been a place I’ve gone to escape from my day and be surrounded by my best friends,” she explained. “It’s definitely the people that make it the best.”

In her 100-meter breaststroke event at the MHSAA Division 1 Championship meet in January 2021, senior Rucha Deshpande achieved an astounding time of only 1:04.92, beating the previous school record of 1:04.99, which had been held for 14 years. She then beat yet another record, for the 200-yard Medley Relay, at the OAA White Division Championship.

“Rucha’s specialty was the breaststroke, but she was our fastest all-around swimmer, holding the fastest times in every event outside of the backstroke,” Schuman said. “She sets high standards for herself and is one of the hardest workers I have ever coached. Despite her status on the team, she has been the ultimate team player.”

Despite swimming being such a big part of her life thus far, Deshpande plans to end her swim career after this year.

“After so much time dedicated to swim, I’ve felt like it’s time to move on… so I will not be continuing on a college swim team,” Deshpande explained. She expressed gratitude for the swim team, saying, “I’m so happy to have spent essentially the last 12 years of my life with this sport. In many ways it’s going to be hard to move on, but I’m excited for the new things to come.”