Fourth of They Lied

As the majority of the country celebrates American independence, The Chariot evaluates what freedom means in 2022. 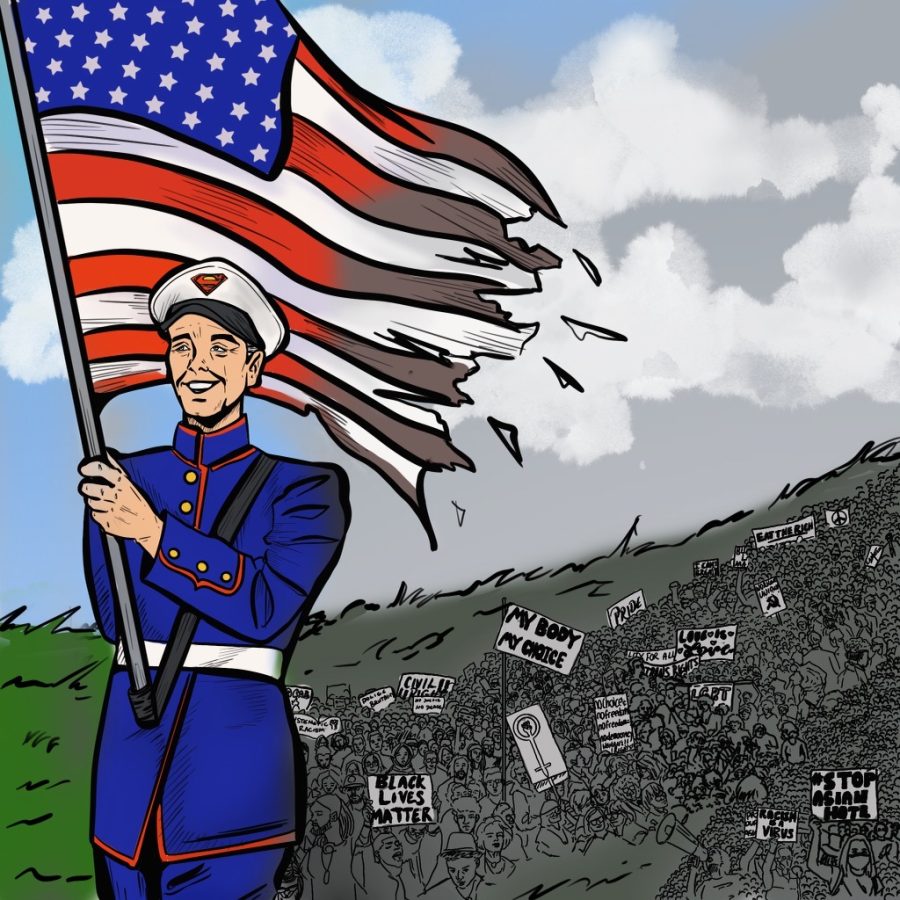 The United States has always had a very shaky history with morals. From before the United States was even considered a nation, the majority of the people on “American” land were belittled and enslaved. However, every year, like clockwork, the average American family pulls out the lemonade and the lawnchairs; all to prepare for a barbeque and firework show that will last an awkward thirty minutes. Not much has changed in celebration since 1777, the first year after the Declaration of Independence was signed, when it comes to food or choice of entertainment.

Even if you’d like to excuse it with the common phrase, “It was a different time,” recent events have limited, or continued to limit, the freedoms of numerous marginalised groups in America. Notably, the Roe v. Wade overturn. Roe v. Wade was overturned on June 24, 2022, immediately lifting the constitutional right to abortion that had existed for half a century. No longer a federal guarantee, states are now allowed to individually decide the legality of abortion. Although the Roe v. Wade overturn is relatively recent, women have been criminalized for their abortions or miscarriages since early 2020.

Oklahoma resident Brittney Poolaw miscarried in January 2020 after being pregnant for four months in a hospital. In October of 2021, she was convicted for the first-degree manslaughter of her unborn child and sentenced to four years in prison.

Our neighbour, the state of Ohio, has recently decided to not let a ten-year-old girl, after being raped, recieve an abortion. She will now travel to Indiana to terminate her pregnancy. Ohio laws, like many other states, do not make exceptions for rape or incest when it comes to abortions.

Unfortunately, majority of those seeking abortions in states outside their state of residence may now be criminalized, if they successfully terminate the pregnancy. In the Opinions section of the case, Supreme Court Justice Clarence Thomas suggested that the Supreme Court of the United States of America revisit the court cases that permitted contraception, decriminialised homosexuality, and legalised gay marriage. These cases are known as  Griswold v. Connecticut, Lawrence v. Texas and Obergefell v. Hodges.

Although Pride Month has just ended in the United States, there have been large amounts of both homophobia and transphobia being passed as legislation. Florida’s Parental Rights in Education law was signed on March 28th and went into effect last week. Most know this law as the “Don’t Say Gay” bill. This law would require teachers to report if a student has come out as gay or trans to the student’s family. It would also make it necessary for teachers to alert parents of other children if a student identifies as part of the LGBTQ community in the case of an overnight field trip. Teachers who identify as part of the community would also be required to remove any such “evidence” from their classrooms.

These actions are blatantly against what this country claims to celebrate, but these shouldn’t be the sole reason you re-evaluate your ability to party. Because this isn’t a recent issue, it’s one that has always been present.

This country is built off of the labour of its black residents and continues to refuse them equity. We cannot talk about American history without discussing slavery or indentured laborers. Although people like to point out that slavery ‘ended’ in 1865, this has been proven false. Slavery lasted well into the 1960s in areas of the Deep South. But even after slavery was abolished elsewhere in America, black Americans were not left alone. When black males were granted voting rights, poll taxes and literacy tests would prohibit the majority from being able to vote.

With the New Deal and its goal to provide housing, a process to determine investment in land was created. This process made sure that investors would ignore areas with a heavy African-American presence and these areas would be marked with red lines. The lack of investment in these areas would include something as simple as not planting trees, but would have a big impact on who was paying more for their water bill. Small things like this would lead to the creation of ghettos and financially devastate the black community for years to come.

Beyond financial devastation, American institutions have a history of not being very welcoming nor inclusive. Schools would begin to desegregate after Brown v. Board of Education, but even our school, Troy High School, wouldn’t reach full immersion until the late 1980s. Other public institutions such as the police force are known for their unnecessary force towards Latinos and black Americans. The police, meant to protect the welfare of American citizens, continue to brutalise key members of our community without regret. When we protest, it doesn’t stop them from showing their negative bias towards ethnic groups, treating them with less respect than those  they consider to be true American citizens.

Even American workers, the majority being  immigrants, have been historically ignored by this country. The vast amount of reform that supports workers — such as an 8 hour workday, a 40 hour workweek, and the abolition of child labor — have come from ideals supported by socialists and communists, two ideologies America loves to scorn.

If we are to look past the domestic conflicts, we have: Native American genocide, the Phillipines, Hiroshima and Nagasaki, Puerto Rico, Vietnam, Iraq, Iran, Hawaii, both Koreas and the creation of Israel. This isn’t even the entire list.

This country has never stood for something we should celebrate. A select few could celebrate in 1777 and a select few can claim to celebrate now. There is no freedom here, nor democracy, and it’s time we all stopped pretending otherwise.