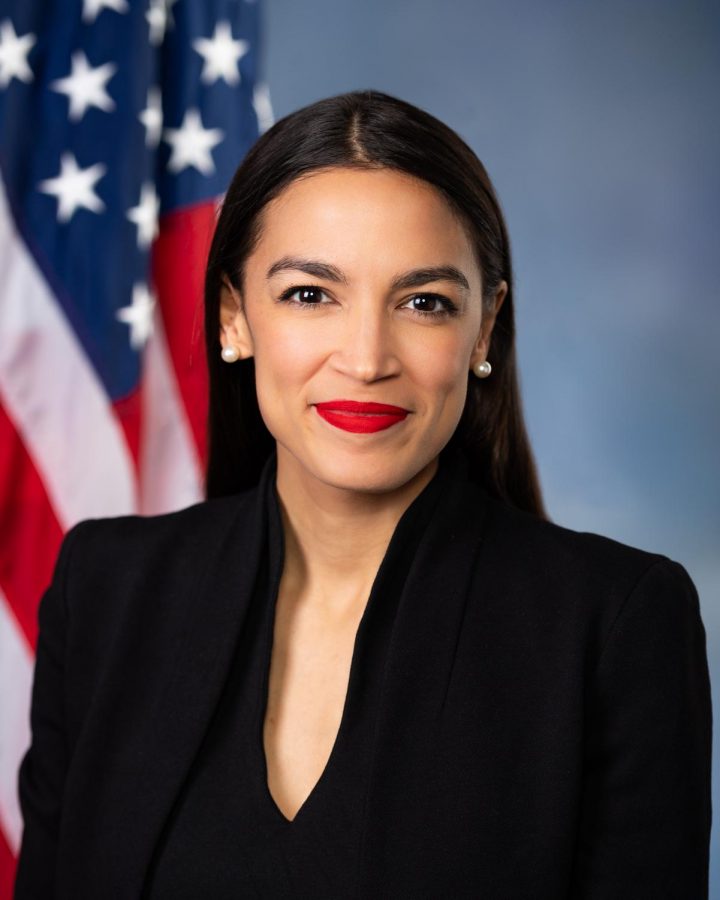 Alexandria Ocasio-Cortez is appealing to many young voters because of her frequent use of social media.

Often referred to as one of the most charismatic politicians out there, Alexandria Ocasio-Cortez is commonly recognized today as the democratic socialist. Not too long ago, she was working as a bartender before defeating Joseph Crowley in the midterms to win the House of Representatives seat for New York’s 14th congressional district, all without any corporate funding. Crowley was a long-time Democrat as well as one of the most powerful figures in D.C,— and known for staying within party lines.  Now with her new spot in Congress, Cortez has plans to do just the opposite and rock the congressional boat, both democratic and republican.

This country isn’t all 75 year olds and older people, the majority is younger people,”

Running on promises for universal healthcare, economic security for the poor, closing the gap between the rich and poor, and a plan for ending climate change, even Republicans had to share their awe.

“I aspire to be the conservative AOC,”  Republican Matt Gaetz, a representative of Florida said in an interview by Politico.

At age 29, Cortez is the youngest woman ever elected to Congress in the history of the United States, giving her a youthful edge against some of the more established politicians. One of those edges being her frequent use of social media to engage younger voters. Cortez’s frequent tweets, Instagram stories and snaps have left a large impact on her voters as well as those not yet old enough to vote.

Senior Matthew Dong doesn’t support all of Cortez’s initiatives, but claimed that her efforts are really commendable in terms of getting people more involved and invested in politics than they might’ve been before. Dong himself said he first heard of Cortez when his friends pointed out her Instagram posts during the midterm elections.

Junior Madelyn Holmes’ interest in Cortez was also sparked during the midterms. In fact, she found herself most fascinated with her because some would consider her as something of an anomaly in Washington. She was young.

“The [younger politicians] know what we would do in situations and they think like us,” Holmes said.

Holmes then began to follow Cortez on social media, saying that social media works as a really good way to get your message across easily.

“If you follow [a candidate] on Twitter, you know more about the candidate and that can help in choosing who you want to vote for,” Holmes said.

However, Holmes is also aware of just how easy it can be to get carried away with anger and post impulsively, even if you are a political candidate. Although she agrees with Cortez on most aspects, she doesn’t support her being negative toward other politicians on social media.

“You have to be careful of what you put on social media, especially when you’re running for a position of power,” Holmes said. “Those [posts] can always come back to hurt you.”

Senior Luke Kozlowski, also a supporter of many of the same political ideologies Cortez supports, discovered her on Twitter. His thoughts on social media being used to advance political campaigns are that it’s convenient, so it might as well be done.

“It’s free, so it’s an easy way to get your message out to everyone,” Kozlowski said.

“[Her tweets] seem more reasonable and are in complete sentences.” Kozlowski said.

Dong agrees that a diverse government is important, and that social media will always play an important part in getting more people into politics. Even though seeing the personal sides of politicians isn’t crucial for him, he says he knows it’s important because other people will want to.

If you follow [a candidate] on Twitter, you know more about the candidate and that can help in choosing who you want to vote for”

However, he also believes a politician’s social media persona is not all that matters.

“I don’t think identity politics is a good thing to be pulled towards,” Dong said.

Dong also explained why he doesn’t trust social media in any pretense.

“I think it can be really misleading at points on both the right and the left,” Dong said.

The idea that some politicians not active on social media may be seen as disconnected and therefore unable to solve the problems of everyday Americans also doesn’t sit well with Dong.

“It’s hard to be disconnected in society when you’re helping some people [as a government official], so I don’t think those things are mutually exclusive,” Dong said.

All in all, Dong said that he sees politicians of any age using social media as ultimately pretty good as long as it helps the younger voters. Although to him personally, it’s not a dealbreaker for him when deciding if he agrees with a candidate or not.

The fact that Cortez is the youngest in her occupation was also a plus for Kozlowski.

“I feel like [Cortez] appeals to my audience more,” Kozlowski said.

Kozlowski also stresses the importance of diversity of age in government.

Kozlowski believes it is important for the government to equally reflect the American people in order to meet the needs of all Americans, even when it comes to age.

“This country isn’t all 75 year olds and older people, the majority is younger people,” Kozlowski said.

In the end, however, it is not her sheer use of social media that draws Kozlowski to Cortez, but her transparency in terms of the state of the American government.

“I thought it was really interesting when she exposed how our government actually works and how there are a lot of flaws in the system and that we can hopefully work and rebuild the government and patch it up,” Kozlowski said.