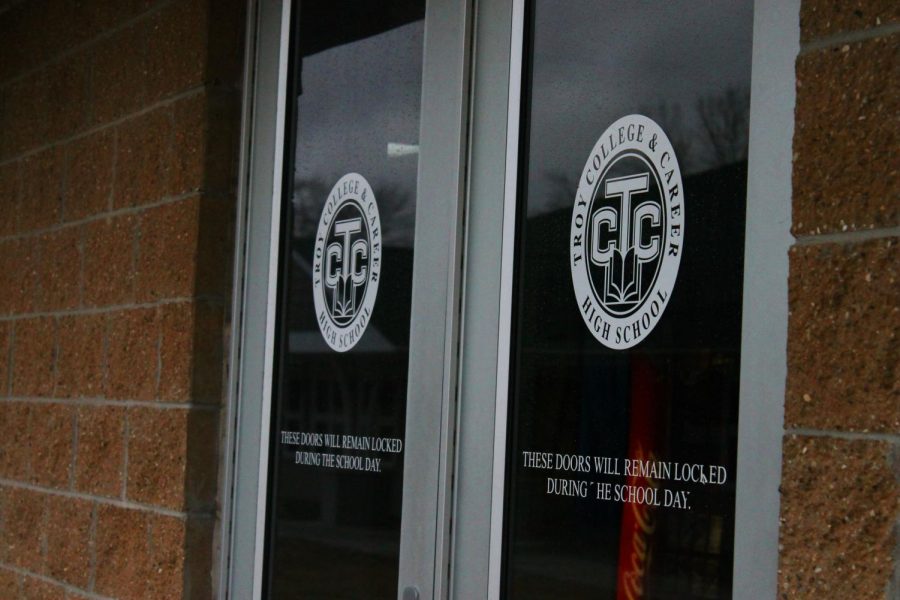 TCCHS is a school with one hallway. The doors bear the logo of the school.

A one hallway high school with a population of 127 students and seven full-time teachers, Troy College and Career High School was formerly known as Niles Community High School. TCCHS evolved from NCHS five years ago, the latter started in 1995. TCCHS is in a joint building with other academic support centers in the Niles Center building. TCCHS offers an accelerated academic program that allows students who have fallen behind in credits to have the ability to complete them by their original graduation date. TCCHS is more than just a school for the student that has fallen behind. It has created an individually-tailored, understandable and low-stress high school environment. It gives students the chance to alter their past troubles and misconceptions of school and be in an environment that is suitable for themselves.
Bill Turner, principal of TCCHS, is new to the school for the 2019-2020 school year. He left Athens to become the director of College and Career Readiness and happily took on the role of TCCHS principal as part of that responsibility.
“I believe this is a great opportunity for me, because it helps challenge my thinking and leadership in ways that will hopefully benefit our entire TSD community,” Turner said.
TCCHS is known to many as “Niles,” and students who don’t know much about the school don’t know it as TCCHS.
“This building was something different when it was created, and it’s evolved,” Turner said. “We want to help students, but we need students who want that help as well.”
The school has had its fair share of rumors and stigma. Students who enrolled at TCCHS have a variety of reasons for why they came. Some students don’t enjoy the high school life of bustling hallways and jam-packed stairwells. Some students have never been to a public school. Some decide that a smaller population is a better environment for them.

“Many people think TCCHS is a place for kids who do bad things or those who get dumped from their original high school,” senior Chloe Teodoridis-Clark said. “I’ve known many kids that both went to and graduated from TCCHS and I know that each of those kids are as hardworking and as talented as any other kids.”
Whatever the reason for one’s enrollment at TCCHS, the school has adapted into an accommodating place for everyone.
“They get opportunities to be successful and believe in themselves and do it in a way that is different than what the current high schools offer them,” Turner said.
Kayla Sage, a junior at TCCHS, started there as a sophomore. She had been homeschooled since elementary school. Sage came to the school in need of catching up on credits. Coming to TCCHS after being homeschooled gave her an opportunity to socialize with peers and create a more encouraging school life.

“It clicked to me that I could actually do things here because of the teachers motivating me,” Sage said.
Being in high school may have its fair share of cliques and drama. Many students like junior Costa Papadelis at TCCHS don’t see the cliques and drama that other high schools may have. The school prides iteslf on having less to no cliques, a very-well managed anti-bullying policy and an environment that has little judgement from peers.
“Our school has this no bullying policy,” Papadelis said. “Here it is a lot easier to enforce and it doesn’t really need to be enforced because everyone gets it.”
Graduates of TCCHS have moved on to different futures. When one graduates from TCCHS they are given a diploma with the name of either Troy High School or Athens High School. If a student did not formally come from either high school they graduate with the name Athens High School on their diploma.
Jacob Botardo, an alumni of TCCHS, who previously went to Athens, knew all throughout high school he wanted to become a Marine. On Dec. 19, 2018, he officially signed up for the 12-week Marine Corps Recruit Training. After graduating TCCHS, he was shipped to Parris Island, South Carolina in September of 2019. In a letter sent from recruit training, he provides his opinion of TCCHS.
“TCCHS was great,” Botardo said. “The teachers cared more about students personal life and education than the teachers at my first school. The way they taught us was different from Athens, it made it a lot easier and less stressful.”
Having seven full-time teachers is a challenge for TCCHS when it comes to having enough teachers to teach a plethora of subjects. When TCCHS doesn’t have a teacher to teach a specific subject, they offer it as an online class. The teachers of TCCHS do more than lecture and hand-out homework with the same routine each day. Students have said that the teachers help them with more than just academic problems.
“The teachers know every kid’s name, it’s crazy,” Sage said. “They‘re so close with the kids and have a personal conversation. It’s almost like each and every one of them can be a counselor. They are really nice. It’s really nice to be here.”
Jeff Rainwater, an English and Social Studies teacher at TCCHS has taken a step beyond working with students in the classroom. Recently, he went with a student to help them purchase their first car. He took them through the process of test-driving and haggling prices to get them the car. Rainwater doesn’t see himself as the only teacher taking a step out of the classroom.
“Any teacher in this building would do that, taking the kids out to lunch who don’t have a lunch, or are hungry,” Rainwater said. “That’s all part of the personal relationship.”
From the perspective of most outsiders, TCCHS doesn’t come across as your “average” high school. Students at Troy High school or Athens High school may find it to be a school they want to avoid; what those students don’t know is some choose to go to TCCHS rather then Troy High or Athens.

It clicked to me that I could actually do things here because of the teachers motivating me.””

“At TCCHS there is never a dull moment,” Rainwater said. “There is always something going on. We’re always trying to engage students that haven’t always been really engaged. We want to draw them in and make sure that they are engaged and that they find interest and relevance to what we are doing.”
TCCHS is considered an alternative school. Alternative schools are educational establishments with a curriculum and methods that are nontraditional. They are meant to help a different type of learner succeed when a different environment discouraged them.
“It has a bad rep for being an alternative school but alternative doesn’t mean bad, “Lola Lekaj, a junior at TCCHS, said. “It’s just a stereotype and it sucks because it’s such a great school.”
Turner takes time to learn each student’s name and get to know a little bit about them. He has found that each student has a different story of how they have gotten to where they are today.
“It’s not about getting hung up on the stigma.” Turner said. “It’s about educating people about what [TCCHS] really is, so that more kids can share that opportunity and we can help more kids. If we’re in the business of supporting our students, then we should be in the business of educating as many kids as possible about what’s out there, so that kids can decide for themselves what they need.”
TCCHS is in store for some big changes. For the 2020-2021 school year, the Niles Center, along with TCCHS, will be moving locations from West Square Lake Road to Big Beaver Road in the ITT Technical Institute building. The school will have the opportunity to have more classrooms and space for students. This change opens the question of what the future looks like for TCCHS.

“What we are figuring out right now is what’s the best way to make this space as perfect for kids as possible,” Turner said. “We’re just trying to make it a learning institute that is nontraditional and meets the needs of learners that need something different from traditional high school.”
TCCHS is focused on its students well-being and future. The Troy School District has put in money toward making a new environment for students to learn. Whether it’s online classes, or earning an associates degree while still finishing high school, TCCHS offers opportunities for students that might not be available at a traditional high school.
“I think it is good for kids that have been discouraged and distressed over their grades, ”Sage said. “It’s a lot better for anyone who has been struggling in school. If they are not in a school that is going to help them succeed and the teachers aren’t actually closely working with them, then they’re not going to be able to succeed. So, it is really good for kids like that.”
Being a school with one hallway, 10 classrooms, 127 students, seven full-time teachers and no cafeteria, TCCHS strives to be outside the box. Students not only get an alternative way of learning, but they get support from each teacher on personal matters.
“At the traditional high school, you’re one in 2,000, at TCCHS your one of us,” Rainwater said. 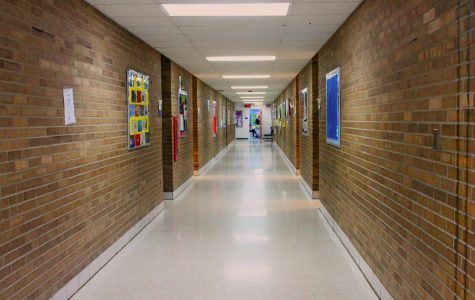 As students at Troy High School, most of us know Troy College and Career High School as Niles, due to the fact that it is located inside the Niles Center and we have no further indication of the school’s actual name. The name Niles carries with it a stigma; many believe this school is only for the people suspended from Troy High and Athens, the kids who have fallen through the cracks of our...