Spider-man: Into the Spider-Verse Movie Review

Spider-Man: Into the Spider-Verse Movie Review

Chances are that if you watched movies in the first two decades of the 21st century, you’ve seen a Spider-Man movie. Adaptations of a Spider-Man series in the theater, spanning from the original Raimi trilogy to 2018’s “Spider-Man Into 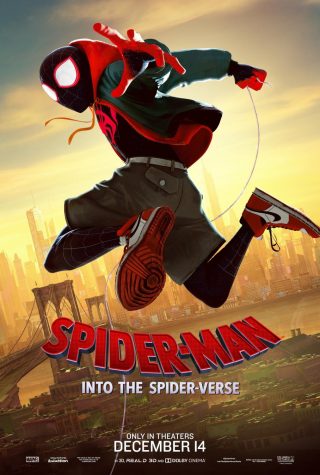 the Spider-Verse.” One of the successes of the film is that “Spider-Verse” recognizes it’s not the first piece of Spider-Man media the viewer had consumed. The film satirizes the now iconic radioactive spider bite by integrating it into an already existing scene, and it being played off by Miles Morales as just a spider bite. When Peter Parker is faced with Miles quoting “with great power comes great responsibility,” he responds by saying “Don’t you dare finish that sentence- Don’t do it, I’m sick of it.” You could look at Peter Parker leading Miles Morales symbolically of someone who is sick of Peter Parker, he’s lazy, done everything he thought Spider-Man could do, and only Miles could show him that there will be new problems and that the multiverse still needs Spider-Man. The movie is able to not spend too much time on events that in the past had been overdone, it’s able to give a fresh new look into Spider-Man, showing the core of what Spider-Man is. “Spider-Verse” is able to show and follow Miles Morales, who at his core is just a kid. This movie doesn’t show the struggles Tobey Maguire’s Spider-Man had such as struggling to deliver pizzas or to pay rent; Miles goes through the struggles that mirror the original Spider-Man comics.

Miles is a character who has a lot going on in “Spider-Verse,” who is faced with many unique problems. He doesn’t understand his own emotions, because he is an awkward kid, and it’s overwhelming for him to have to balance two lives when he’s not confident that he’ll succeed in either. The writing in the movie accepts the fact that Miles is a kid, Miles’ experience of growing up while learning to become Spider-Man becomes the centerpiece of the movie. Miles has to adapt to a new preppy school, is exposed to different points of view from different authority figures and even finds himself struggling to communicate with a girl. “Spider-Verse” is both a superhero origin story and a coming-of-age story; it uses many well-developed characters around Miles to build Miles himself.

It’s visible throughout the film that Miles Morales played by Shameik Moore, and Peter Parker played by Jake Johnson have a lot of synergy in this movie, shown through their dynamic student and mentor relationship. Miles is growing as both a superhero and a character, powering against Peter’s lethargy in order to progress the plot and even teach his character lessons.

In reference to the aforementioned spider bite scene, and in general, the entire movie, the animation is gorgeous and innovative. The animation achieves the goal of making a comic book come to life, through many techniques such as combining the CGI, which common in the animation industry, today with line work and painting, along with eliminating motion blur. “Spider-Verse” is able to pioneer its own animation style that hasn’t been seen before, and it uses this to synthesize many different iterations of spider-people into one art form.

Overall I loved “Spider-Man: Into the Spider-Verse” and did not find many flaws with it. My biggest flaw with the movie is that the main villain is underdeveloped, with his character not having much to him other than his main motive. The main villain’s lack of depth was supplemented by many other great characters in the film, from good to evil and everything in between. I’d recommend this movie to any fan of Spider-Man, animation or even someone just looking for a genuinely good movie.