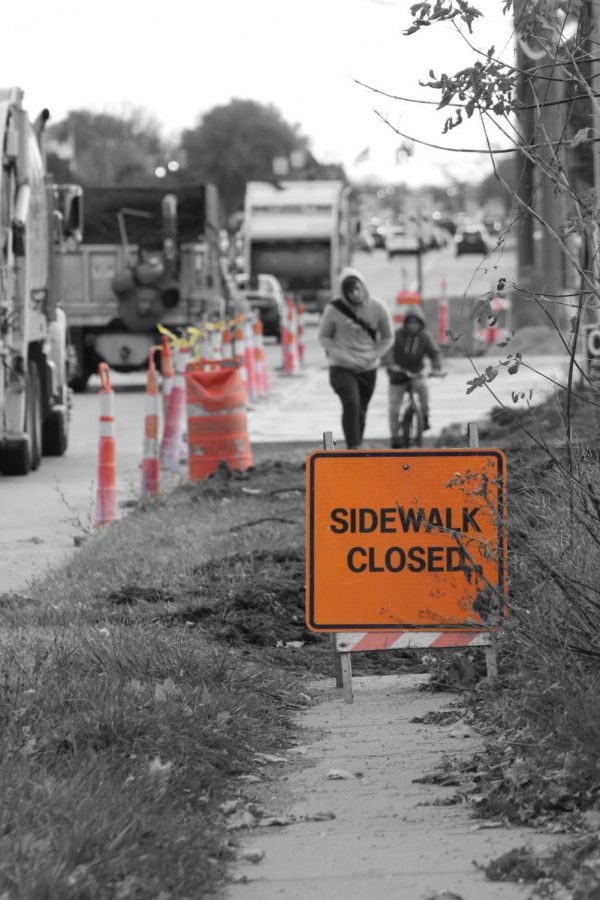 Two pedestrians walk on a sidewalk that was closed by a construction site.

As concern of the condominium boom in Troy grows, an election may be the saving grace of Troy's greenspace issue.

Jane Jackson, who has preferred to remain anonymous, opposes the construction of the new condos.

“I think we have enough condos,” Jackson said, “I wouldn’t vote to have more condos go up.”

With a growing population of 85,584, it may seem like new businesses are coming to Troy everyday. It’s no debate Troy has become a target of urban sprawl over the past few years.
On Dec. 5, 2017, the Troy City Council directed City Administration to define the difference between open space and green space. Their resulting definition of green space is “public and privately available land with vegetation or areas allowing recreation or aesthetic purposes,” whereas open space is “any parcel of land that is undeveloped and has no structures,” which include green spaces.

According to The Trust for Public Land, a group devoted to protecting land and designing community parks and gardens, only 13 percent of Troy residents live within a 10-minute walk from a park. To some, this may seem insignificant, however it has to be accounted that these are established parks and not undeveloped properties. Compared to nearby Rochester, 57 percent of the population lives within a 10-minute walk from a city park.

During this past election, the topic of greenspace and the rapid development of Troy was highly debated between the two candidates.

Mayoral Candidate Dave Henderson insists the condos are necessary to keep up with the rapid growth in Troy.

“In order to continue to promote Troy’s business sector, Big Beaver needs to continue to develop residential housing for the employees of these businesses,” Henderson said on his campaign website.

On Nov. 5, Henderson’s opponent, Ethan Baker was elected as mayor of Troy. He hopes to keep Troy’s greenspace along with a balance of suburban and urban culture.

“Troy is unique in that it has a very strong economy that thrives on development, quiet residential neighborhoods, parks and greenspace,” Baker said on his campaign website.
As city council member, Baker also pushed for the preservation of greenspace.

“I have proven to balance these often competing interests to keep Troy’s economy booming and tax base healthy while also recognizing the extremely essence of Troy [the people of Troy] have known and loved,” Baker said.

Junior Om Shah is concerned about the destruction of greenspace and thinks it’s strictly because of development for money.

“Personally, I think that the condos are a symbol of a larger issue of development versus environmentalism,” Shah said, “I agree with Ethan Baker on this one, there’s so many houses being developed everywhere and we’re losing the precious forests we have.”

Senior Shurthi Sunilkumar, the daughter of a former city council candidate, thinks a lack of interest in politics has to do with why this issue isn’t being talked about in Troy High.

“I don’t really think kids are really knowledgeable about this unless they have a specific interest in politics,” she said.

Sunilkumar believes in the necessity of the use of public parks in a productive manner.

“I have a nonprofit that I started that’s called Kids 2 Kids that is held at Boulan Park,” Sunilkumar said. “It’s the perfect location because it’s really nice for kids and at the same time, families can relax.”

As development continues on the condo complexes, many are hopeful that Troy city council officials implement environmentally-conscience greenspace policies like Baker supports.